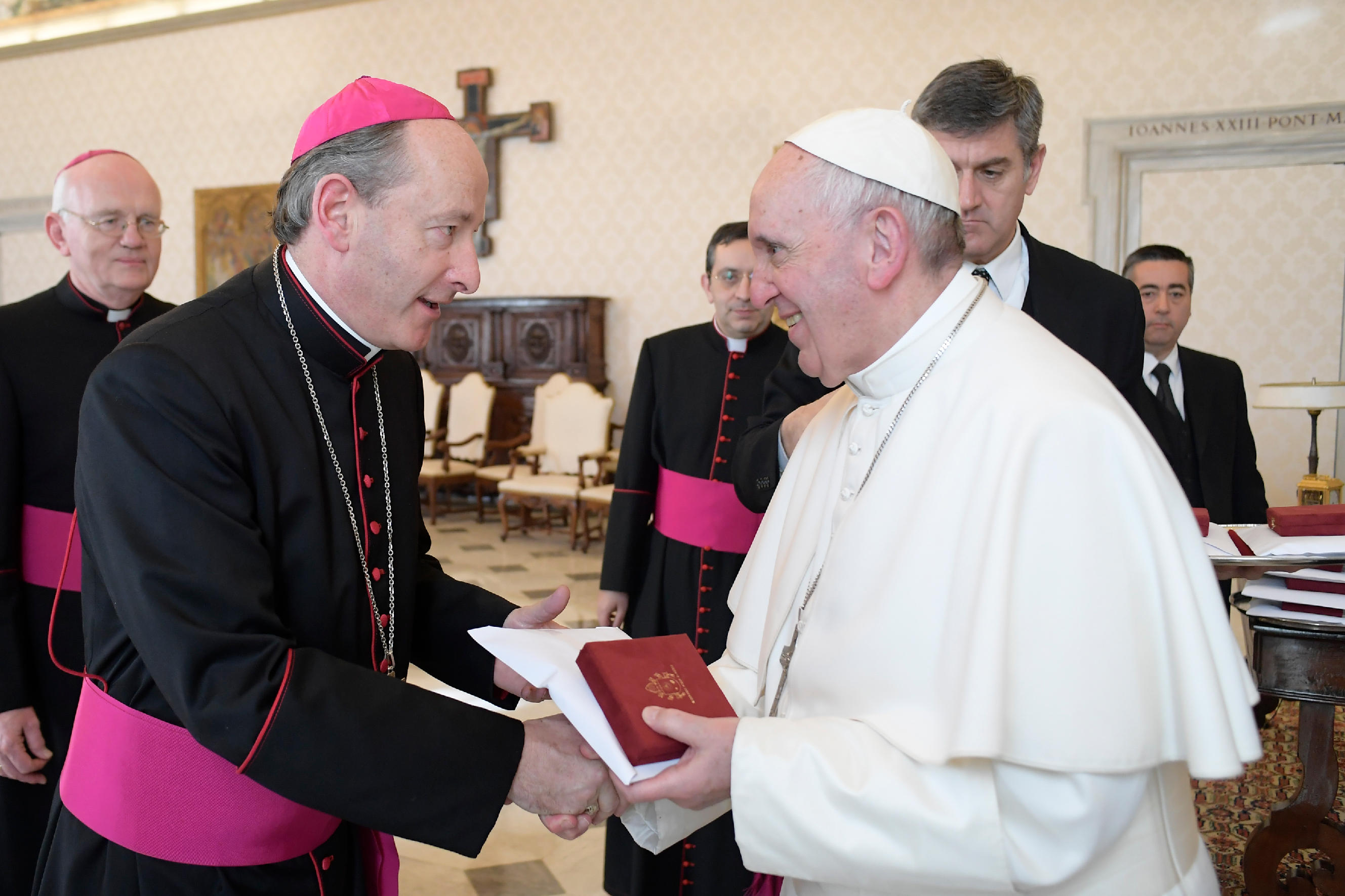 The day by day visit report is outlined below.

Bishop Cullinan is now on a ten day visit to Rome called ‘Ad Limina’ that takes place every ten years for the Irish Bishops.  They will meet Pope Francis on Friday next, but in the meantime, they will be discussing with various different agencies, what is happening in their various dioceses. 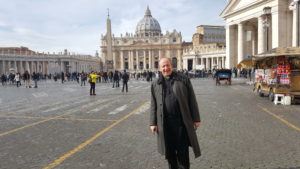 The Bishops arrived to Rome early on Saturday morning, and celebrated Mass in the Irish College. After that, they went sightseeing and saw all the major sites, including the Coliseum, Roman Foram, Trevi Fountain, two Carravaggio paintings and of course, many Churches.

Day 1 –  16th January, Bishop Cullinan attended meetings at the Congregation for Consecrated LIfe where they had a frank discussion. Lots of sound advise about new insitutes and orders. Mass was celebrated at the tomb of St. Peter where Bishop Phonsie found it profound to be thinking of apostolic succession.

Congregation for Education was the next stop where another frank discussion was held. The Irish situation is unique but the challenges are all similar. The afternoon saw a meeting at the Dicastery for laity and family life. Another meeting was held at Council for protection of Minors. The day concluded with night prayer.

Day 2 –  17th January began with Prayer and Mass at 7.15am. Transfer to Congregation of Bishops then followed for a discussion about a long term strategy for evangelisation in Ireland. The Church no longer occupies the whole space but is a Sacrament for the world of God’s love and grace.

Transfer to Congregation for Doctrine of the Faith with Cardinal Muller. A discussion on crisis of the faith and subsequent crises in society with rise of secularism. The Church offers true hope.

In the afternoon a meeting was held with the council for new evangelisation. There were lots of news ideas, and some are already in place in this Diocese e.g. Pilgrimages, 24 hours for the Lord, Lectio Divina, Workshops relating to Faith, . A general question was asked about what contacts there were in relation to culture. Evening prayer was followed by dinner. Then followed night prayer after some free time, and a well earned rest.

Day 3 – Breakfast at 7.30 then transfer to congregation for Causes of the Saints. Several causes of Irish saints are being worked on but in the absence of a miracle, there is no movement. We need to pray for miracles through the intercession of Edmund Ignatius Rice, Edel Quinn.& Matt Talbot, the Irish martyrs.and others.  At 11.30 we moved to Congregation for Divine Worship and Sacraments. Confession was discussed and liturgy when priest is absent, among other things.  This was followed by lunch in Irish college. Mass was then celebrated in St John Lateran Basilica.  Archbishop Diarmuid Martin was the main celebrant.  A  reception followed that was hosted by Excellency Emma Madigan, the Irish ambassador to Holy See.

Day 4 – 6.55 am Mass in Irish college. Private prayer in basilica of St Paul outside the wall was very special.   It is situated near Beda college where our seminarian Mark O Toole is studying.   Mark is enjoying his studies very much so please keep him in your prayers.  A 4pm meeting followed with Council for inter-religious dialogue.  We discussed the issues of our relationships with Islam. Church is being asked to dialogue and build bridges in a spirit of respect and friendship. Again the discussions were very open. We returned to  the Irish College for 6.30pm meeting.

Day 5 – Breakfast 7.30 Today was our special day as we prepared for transfer to Vatican to meet Pope Francis. I prayed my Brievery on the way, and as we waited for our meeting.

Pope Francis met us individually in the library.  It was a wonderful experience and a very blessed encounter. We travelled back to the Irish College for lunch and then transferred to St.Paul outside walls Church for Mass. Archbishop Kieran O’Reilly was our main celebrant. Homily was based on missionary church.   Several Irish from around Rome have attended the Masses in the basilicas. We are all conscious of report into institutional abuse in the North today.  We have remembered the victims. We had quick look at inaugeration of Donald Trump as president of the USA.  We are also remembering those killed or injured in the earthquake here . Then reception in college from 6 to 8 for Irish religious and Irish community in Rome.

Day 6 – Breakfast at 8.30.  This was followed by transfer to Apostolic Signatura for 10am. The signitura is the highest judicial authority of the Church apart from the Pope himself. We discussed the possible rearranging of marriage tribunals in Ireland and how the signatura could help with that and penal decisions in specific and serious cases. I went for lunch in a priests college I used to attend for spiritual direction and confession when in was in Rome from 2001 to 2004. Met some old friends. Mass was celebrated at 4.30pm in St Mary Majors basilica with Archbishop Michael Neary of Tuam. St Mary Majors is one of the first churches dedicated to Mary in the world. Over the altar a v significant image of Mary which is a favourite of Roman people.  I had dinner with a Maynooth classmate who works in Rome Fr.Seamus Horgan. After that paid a quick visit to an  irish pub!

Day 7 – Mass at 10am with Archbishop Diarmuid Martin as main celebrant. A good group of Irish from the city attended. I met three ladies from Dungarvan! Gave them a quick tour of the college which was founded by a Waterford man Luke Wadding. Also a former rector was Tobias Kirby who was for a time spiritual director for St John Bosco. The Diocese of Waterford and Lismore has many special connections here.

Then after a time of prayer we went to the Irish Dominican community down the hill from Irish college for a lunch to celebrate the closing of their 800 yrs. The Dominicans of Bridge Street were remembered in prayer . We spent about 4 hrs there which included a short tour of the church which has a first century pagan temple under early Christian church under the 12th century present basilica.

Day 8 – Mass at St. Patrick’s Church, Rome on Monday 23rd. Bishop Michael Smith was our main celebrant where he used Martha and Mary as a theme for his homily. How often are we like Martha but we need,  like Patrick to sit at Our Lords feet and pray, listen, and trust.

Day 9 – Mass at 6.55am, followed by breakfast. Then transfer to offices of Congregation for Clergy. All bishops attended where we discussed new pressures on priests and need for better care of priests in all aspects – physical, pastoral, spiritual and human. Vocations crisis was also discussed. A new vocations office is being set up in Ireland with Bishop Phonsie as head of vocations council in Ireland. Long discussions with most bishops contributing.  Archbishop Wong from the congregation spoke of how impressed he is of the Irish priests he meets as well as lay pilgrims to Rome. The new document on priestly formation will be published in book form soon.  It is already on Vatican website and well worth reading.  After meeting Bishop Phonsie went shopping for vestments with diocesan administrator of Clogher.
Lunch in the Irish college was followed by a free afternoon. A reception was then held in the Irish embassy to Italy. We were warmingly welcomed by the ambassador.  Pizza with six bishops concluded the day, with one Bishop celebrating a significant birthday.

Day 10 was a free day – Bishop Phonsie travelled to Orvieto with Bishop Donal McKeown. Pictures showing the Irish connection are below. St. Patrick’s well has connections to Lough Derg, St. Patrick’s Purgatory.  2nd picture shows a view of well from the tower. The well reaches about 200 ft below surface and was built to supply water in case of siege 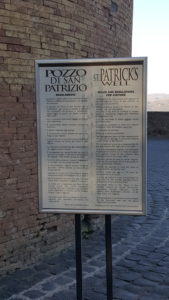 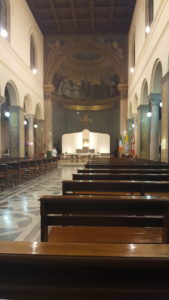 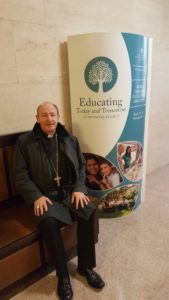 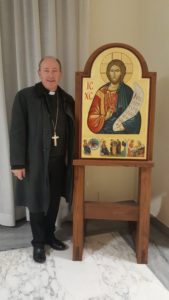 Updates will follow throughout the days ahead.  We pray for the success of the visit. 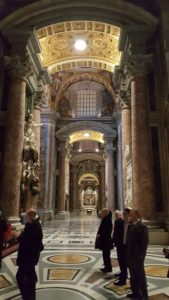 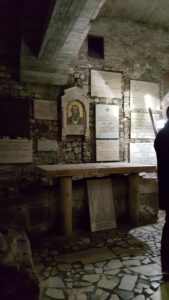 Pictured left is St. Peters Rome, and also the tomb of Ss Cyril and Methodius.