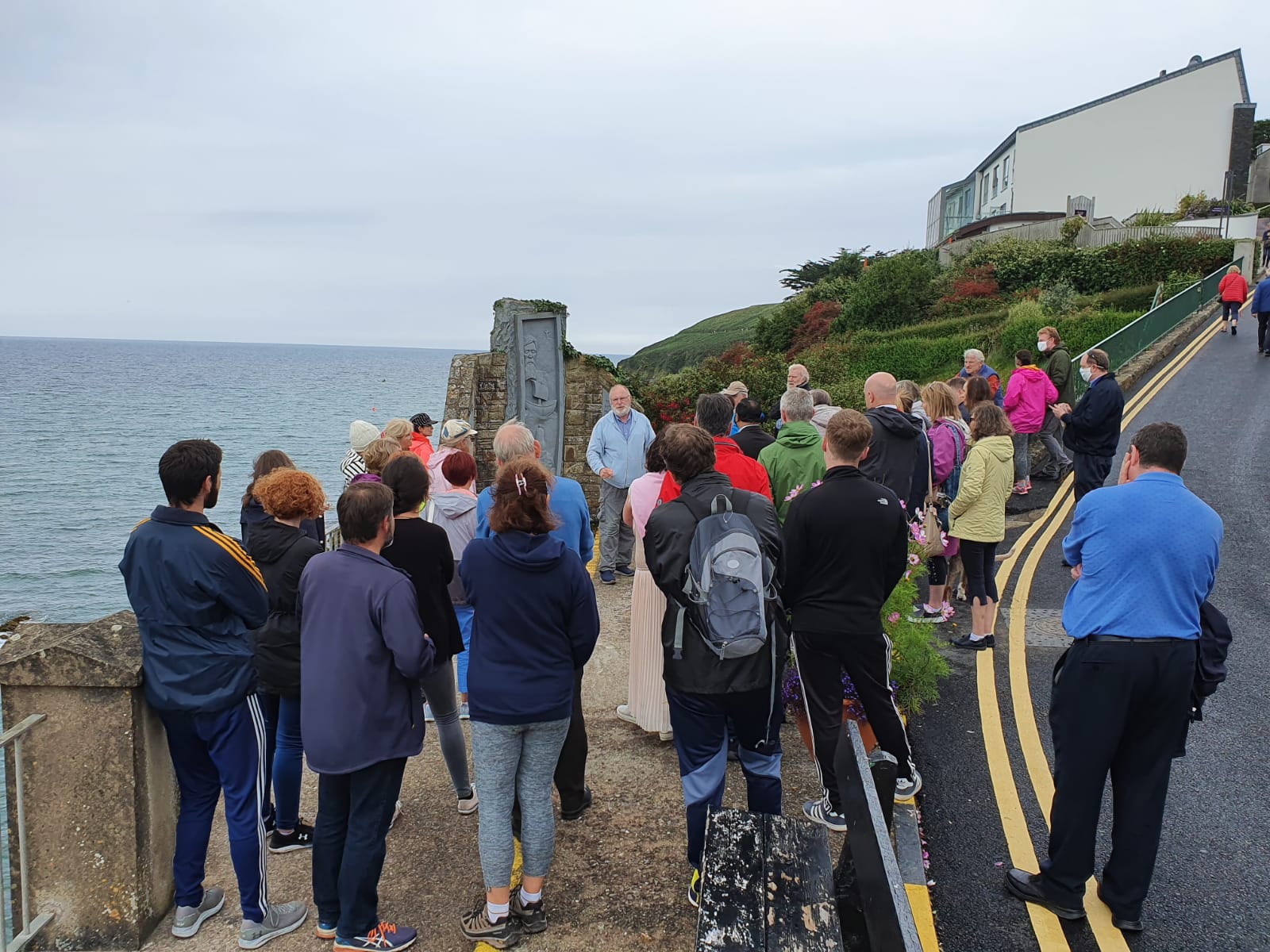 For centuries thousands of pilgrims made their way to Ardmore for the Pattern day (24th July) of St. Declan. This year the ‘Corona’ virus restrictions curtailed the usual ‘candlelight celebrations’ at the well, on the Eve of the Feast Day. However, Bishop Cullinan decided to honour St. Declan by walking in his footsteps with a small ‘socially-distanced’ outdoor pilgrimage, last Sunday.

The guide for the pilgrimage was Mr. Liam Suipéil, who has an expert knowledge of the language, customs, and religious significance of the Ardmore coastline. We set off from the church car park. The forecasted rain held off for the duration of the pilgrimage, thank God. We marched up the cliff walk, and stopped by St. Declan’s stone, and listened attentively to the folklore. We climbed the side of the cliff, and stopped at St. Declan’s Holy Well, to bless ourselves. Liam encouraged us to listen to the ‘ceol na mara’, the very same music that accompanied St. Declan 1600 years ago. The contour of the hill protects the silence of the site from the noise of the town, and thus it is known as Díseairt Deagláin, (Declan’s desert).  The beauty of the seascape surely aided the monks in their contemplation, and it is no less beautiful today! Ardmore was the first monastic settlement in Ireland. In our current information age, there is a stark simplicity, and wholehearted dedication about St. Declan’s penitential life that challenges us all, which is all the more impressive considering that he came from a Royal family.

We then walked to the beautifully preserved round tower, which is one of the wonders of 12th century Irish architecture, and stands 30 metres tall. Its functions were varied including storing valuables, but the Irish word cloig-theach, or bell tower called people to prayer, and warned them of danger. Nearby, we visited St. Declan’s tomb, also known as the Beannachán, or Oratory. Lastly, we visited the “Cathedral” which dates from the 9th, or 10th century. Bishop Cullinan informed us that the Irish monks were known for their very austere way of life, which consisted of praying 150 psalms daily, so we concluded the pilgrimage by reciting the rosary (150 Hail Mary’s).

The “Cathedral” has two ogham stones.  Fr. Donal O’ Connor has written a booklet called “The Pilgrims Ardmore”, where it states that it could take a week to “write a love letter in ogham, so one word has to say it all.”