My main experience of the 50th International Eucharistic Congress 2012 in the RDS andCrokePark inDublin was one of a sense of spiritual fulfilment and intense joy at a human level.  800 pilgrims from the Diocese of Waterford and Lismore attended the Congress on the Thursday – including 100 young people – and 730 pilgrims from the diocese attended the Final Mass inCrokePark on the Sunday.  Feedback from our parishes indicates that it was a faith enriching experience for many of our pilgrims.

What a positive image of Church it presented!  Walking through the RDS, through the exhibition stands, I witnessed the workshops whose capacity in some instances could not meet the demand of pilgrims who wished to attend.  I also had the opportunity to participate in the moving liturgies in the main arena area of the RDS where I was struck again and again by the energy and goodwill which abounded all around.  One had only to witness the number of women and men, young and old, who were smiling, who were truly happy to be together celebrating, discussing and sharing their faith in communion with Christ and with one another.

It was a truly universal gathering; pilgrims came from 120 countries of all ages who gave and received so much of their time together.  I was particularly moved to see the joy and energy of the youth space where young people sang and danced with joy, but also expressed their faith prayerfully.

The many workshops which took place throughout the week also gave me much food for thought and sparked lots of conversations which will continue far beyond Congress week.

Of course, the Final Mass in Croke Park was an unforgettable experience.

A number of special moments stand out for me during Congress week: the meeting between Pope Benedict XVI’s special envoy, the Papal Legate Cardinal Marc Ouellet, with survivors of abuse at the sanctuary of Lough Derg as he said “I come here with the specific intention of seeking forgiveness, from God and from the victims” and that poignant image of Cardinal Ouellet along with the Papal Nuncio, as they both prayed at the penitential beds on the island of Lough Derg; and, of course, the special address by the Holy Father to the Catholics of Ireland which was broadcast to the tens of thousands of pilgrims who attended the final Mass in Croke Park on 17 June, when Pope Benedict reminded us of the strength of our Catholic heritage: “Your forebears in the Church in Ireland knew how to strive for holiness and constancy in their personal lives, how to preach the joy that comes from the Gospel, how to promote the importance of belonging to the universal Church in communion with the See of Peter, and how to pass on a love of the faith and Christian virtue to other generations”.

I have no doubt that everybody from the diocese that attended the 50th International Eucharistic Congress 2012 in the RDS and Croke Park in Dublin were enriched by their experiences and will hopefully bring this spiritual energy back to their parish communities as the legacy of the Congress begins to take shape.

I want to express my sincere thanks and appreciation to Fr. Paul Waldron, C.C. Dungarvan, who over the last number of years directed our diocesan preparation for the Congress and whose dedication and generous work contributed greatly towards ensuring that the diocese of Waterford and Lismore had such a strong attendance at the different events of the Congress.

Pictured below is Bishop William Lee with members of the youth group that travelled to Diocesan Day in the RDS on June 14th.  Also, members of Diocesan Clergy that were present on the Statio Orbis in Croke Park on June 17th. 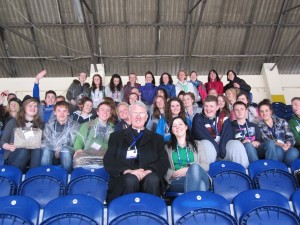 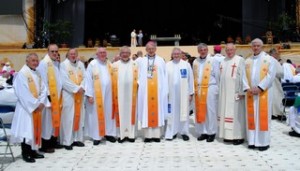 We hope and pray that the congress will live on in our daily lives as we return to our Diocese and parishes – and we truly ‘become what we receive’.
We use cookies on our website to give you the most relevant experience by remembering your preferences and repeat visits. By clicking “Accept”, you consent to the use of ALL the cookies. However you may visit Cookie Settings to provide a controlled consent.
Cookie settingsACCEPT
Privacy & Cookies Policy