Farewell to the Sisters of Charity, Tramore 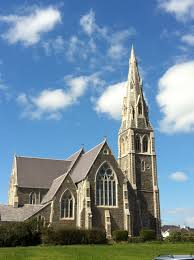 Joining with Msgr. Nicholas O Mahony, and Frs. Shane, Tadeusz and Paul and with all the priests who ministered here in the past, including those who have passed on, we remember especially Msgr. John Shine, and with and the people of Tramore, I welcome the Sisters of Charity who are here in the parish church this morning. We join with all those sisters and laity who are listening to and watching this ceremony from afar, throughout Ireland and perhaps in other parts of the world.

We have come to express our gratitude to the Sisters for what they have done and recount “the gracious deeds of the Lord” as we read from the prophet Isaiah in the 1st Reading, for what they have meant to the people of Tramore since 1866 and to the people of this Diocese since 1842 where they started their work for the Lord in this part of the world in Lady Lane in the city of Waterford.  Our celebration is tinged with sadness because we are saying farewell to the Sisters who were the very heartbeat of this community over all the years.

We are recounting the story of women with a vision. Taking their motto to heart and putting it into action  – Caritas Christi urget nos – they set out on a mission “Committing your cause to the Lord”; as we pray in the psalm. They put everything on the line in their determination to make hope a concrete thing, to make the vision a reality.  As the Sisters set foot here in this Diocese the great famine was not far off, just a few years. Their story here testifies to the way in which the Sisters worked and the sacrifices they made in caring for the sick and poor and the famine-stricken of the area. Inspired by God’s command to love our neighbour they worked and prayed, as St. Paul says in the reading from Ephesian just read,
“according to the abundance of his steadfast love.”

As the Sisters leave us I wonder if we are not experiencing another type of famine – a more subtle one but nonetheless a famine in our society and our culture today.

When the Sisters arrived here they set got to work and valiantly tried to relieve the hardship of as many families as possible.  They paid special attention to the visitation of the sick and the poor in their homes.  The world in which they first worked in the Diocese is described so well in Chapter 10 of the wonderful history of our Diocese –

The Faith Journey of the Deise People by Msgr. Michael Olden, to whom we send our greetings if he is listening and watching now.

We hear so much today about evangelisation.  The word itself is quite abstract and has perhaps lost the flavour of its Greek root – namely “good news”.  The idea is captured in Luke’s Gospel “you are witnesses of these things” (Luke 24:48).  What does it mean to be a witness?  I am witness not simply if I see something, or know something.  I am a witness only if I put into action what I know and have seen.  This is what the Sisters have been doing throughout all those years, calling on God to bless their work as we pray in the psalm:

I am reminded of the first letter of St. John which we are following in the readings for Mass in these days after Christmas. We note when St. John writes:

Being a witness is to put flesh on those words by putting them into action. The Sisters have testified to all outside of their walls to what they have seen and heard and touched.  They have moved hearts because being in contact with the Lord, they have been fired by his presence and have experienced his presence in themselves, and in the Eucharist which is central to their lives.  For over a century and a half the people of this town have been moved by their faith.

Education has been synonymous with the Sisters of charity as well as healthcare.  Their contribution in this is monumental and something which those who speak and write about education and healthcare today might well research if they wish to get an informed view.

Generations of children of the Tramore area received an education which enabled them to take their place in societies here in Ireland or across the world.  Here they became convinced of the value of education, developed skills and acquired family values which would enable them to become mothers and fathers of tomorrow, responsible for building the society of the future.  This was all part of the outlook of the Sisters and their ministry.

I am glad that the sisters contributed to a little publication compiled for the services of appreciation which we held in the cathedral in 2018 and 2019 to mark the huge contribution of all the religious to this Diocese over the centuries including of course the Religious Sisters of Charity. It was and is vital to acknowledge this contribution because the good work done can be so easily forgotten. Human memories are short. Happily God’s memory is eternal.

The Sisters who responded to the challenge were big-hearted indeed.  They confronted the harsh world and they did so with the physical, intellectual and above all spiritual tenacity which produced results.  The price was one which they paid in terms of hard work and endless worry. And so the cross was there too and the cross is part of your coat of arms chosen by Mary Aikenhead.

They worked quietly. How apt the Gospel for today, where these words of Jesus are recorded,

“I thank you, Father, Lord of heaven and earth, because you have hidden these things from the wise and the intelligent and have revealed them to mere children”

The Sisters here in Tramore did not confine their ministry to the classroom.  Their work was woven into the very fabric of the life of this town and this Diocese. In Waterford city they not only visited the sick and poor but provided free education, set up a laundry, an orphanage, and pre-school facilities. For children with special needs, later established care of the aged services, meals on wheels and a social service centre.

In 1845 the sisters set up primary and secondary schools in and a residential domestic science college in Clonmel and then in 1866 through the generosity of a William Carroll established the school here in Tramore. We send greetings to the current principal of the incarnation of the Sisters’ school today – Glor na Mara – to Mr. Pat O Mahony and all his staff and the BOM and maybe to the children tuning in also.

People who were overwhelmed by troubles of one kind or another approached the Sisters for prayers and for help and were enormously comforted and strengthened by their visits. Here in the parish they have been involved in so many areas with various committees in different ministries -the setting up prayer groups, (I believe Elvis showed up on occasion), they formed sodalities, visited the sick, comforted the bereaved and helped with funeral liturgies, provided material and spiritual support to families and individuals and encouraged pro-life work and pioneer groups here and in the city.

Today many people ask if it is even possible to have commitment.  People who “hang lose” and “take life easy” see commitment as particularly difficult, if not impossible. By contrast, by their lives, the Sisters have not only shown great commitment but have shown the fruit of Christian witness.

The Sisters will be enormously missed and I know that I am echoing the sentiments of the whole community when I say this. Here in Tramore the Sisters were committed to the development of the people of the area.  When you work for the betterment of the world and human society in such a way, you are promoting the Kingdom of God and become living witnesses to God’s unchanging love.

They inspired others but were first inspired themselves by that same thing which Mary Aikenhead had burned into her mind and heart in the late 1700’s and early 1800’s – the faces of the poor and sick calling for help and love and care and affection, something which prompted her to found under the encouragement of Dr. Murray, Archbishop of Dublin, the Religious Sisters of Charity in 1815.

The fire which burned in the heart and mind of Mary Aikenhead is a reflection of the sentiments of the Lord Himself in the Gospel chosen by the Sisters for today:

“Come to me, all you that are weary and are carrying heavy burdens, and I will give you rest. 29 Take my yoke upon you, and learn from me; for I am gentle and humble in heart, and you will find rest for your souls. 30 For my yoke is easy, and my burden is light.”

In that spirit, the Sisters were mother figures to so many, trying to keep the lamp of love and faith burning brightly as they served God and the people of God unceasingly.

There have been many elements of change in their lives, in society and in the community to which they ministered during those years. And now they are called to embrace more change and sadly move from here.  I pray that your faith which enabled your work to begin and flourish here will be your mainstay for the future.

As St. Paul says in his letter to the Ephesians read today;

(faith) is the pledge of our inheritance toward redemption as God’s own people, to the praise of his glory.

When the history of the Sisters comes to be written I feel confident that the enormous good done by them and done quietly, secretly, unselfishly, generously and constantly, by so many devoted and dedicated Religious Sisters of Charity will be highlighted.

On behalf of the people of this Diocese and of his parish I say a deeply felt and sincere ‘Thank You’ to the Sisters.  We thank you for the wonderful grace of your presence for 179 years in the Diocese and in this town and parish of Tramore for 155 years.  We thank God for the families of the Sisters who inspired their vocations and we thank God for all those whose lives were touched, healed and enriched by your presence, your prayer, your concern and care.

May God reward you for your goodness and may he abundantly shower his blessings on you in the future.

May Mary of the Angels, Our Lady Star of the Sea guide you all and all of us. Amen.