First World day of the Poor 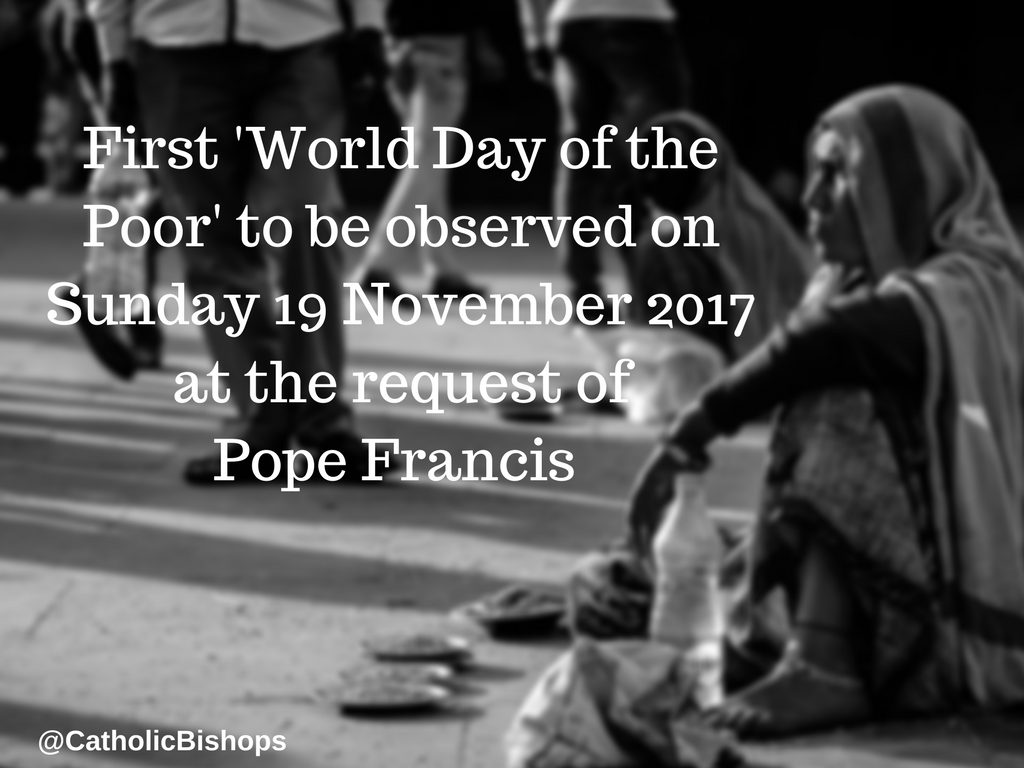 The first World Day of the Poor will be observed in the universal Church on Sunday 19 November 2017 at the request of Pope Francis. In a special message published today, Pope Francis explained that at the conclusion of the Jubilee of Mercy, he wanted to offer the Church a World Day of the Poor, “so that throughout the world Christian communities can become an ever greater sign of Christ’s charity for the least and those most in need.”

The World Day of the Poor message is entitled, “Let us love, not with words but with deeds”. In the message Pope Francis invites “the whole Church, and men and women of good will everywhere, to turn their gaze on this day to all those who stretch out their hands and plead for our help and solidarity.”

Presenting the message to journalists at the Holy See press office today, Tuesday 13 June, Archbishop Rino Fisichella, President of the Pontifical Council for the Promotion of the New Evangelization, which organised the Jubilee of Mercy, explained that this World Day of the Poor was announced spontaneously by Pope Francis.

Archbishop Fisichella said that on 13 November 2016 while Cathedrals around the world were closing their Holy Doors, the Pope was looking into the eyes of those present in St Peter’s Basilica during Mass to celebrate the Jubilee dedicated to the Socially Marginalized. In the preceding days the Holy Father had heard many emotional stories of people in difficulty. He went on to say that Pope Francis probably decided at the end of his homily to announce this day having heard so many moving accounts of hardship.

The Holy Father’s message, draws from the life of Saint Francis and he comments that “precisely because he kept his gaze fixed on Christ, Francis was able to see and serve him in the poor. “

The Pope notes that “if we want to help change history and promote real development, we need to hear the cry of the poor and commit ourselves to ending their marginalization.”

The challenge of poverty

There is also a poverty, the Pope highlights, “that stifles the spirit of initiative of so many young people by keeping them from finding work.”

Concluding his message the Holy Father, underlines that, “the poor are not a problem: they are a resource from which to draw as we strive to accept and practise in our lives the essence of the Gospel.”