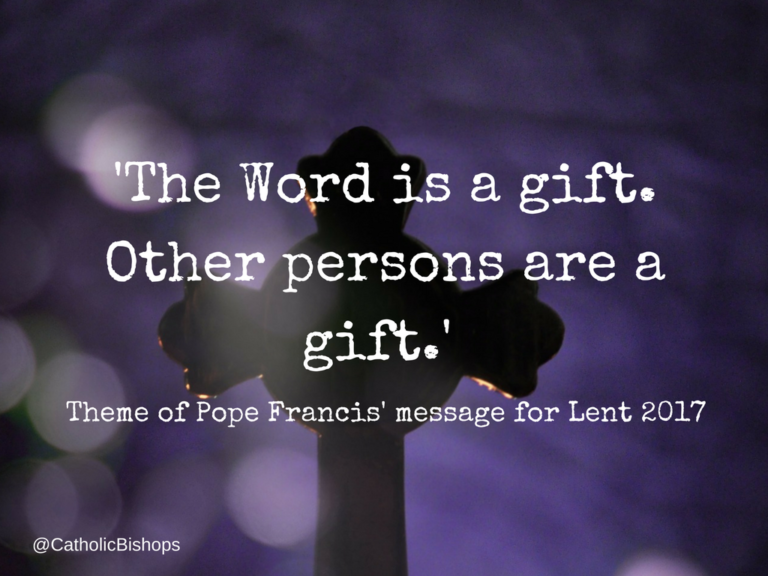 Lent is a new beginning, a path leading to the certain goal of Easter, Christ’s victory over death. This season urgently calls us to conversion. Christians are asked to return to God “with all their hearts” (Joel 2:12), to refuse to settle for mediocrity and to grow in friendship with the Lord. Jesus is the faithful friend who never abandons us. Even when we sin, he patiently awaits our return; by that patient expectation, he shows us his readiness to forgive (cf. Homily, 8 January 2016).

Lent is a favourable season for deepening our spiritual life through the means of sanctification offered us by the Church: fasting, prayer and almsgiving. At the basis of everything is the word of God, which during this season we are invited to hear and ponder more deeply. I would now like to consider the parable of the rich man and Lazarus (cf. Lk 16:19-31). Let us find inspiration in this meaningful story, for it provides a key to understanding what we need to do in order to attain true happiness and eternal life. It exhorts us to sincere conversion.

1. The other person is a gift

The parable begins by presenting its two main characters. The poor man is described in greater detail: he is wretched and lacks the strength even to stand. Lying before the door of the rich man, he fed on the crumbs falling from his table. His body is full of sores and dogs come to lick his wounds (cf. vv. 20-21). The picture is one of great misery; it portrays a man disgraced and pitiful.

The scene is even more dramatic if we consider that the poor man is called Lazarus: a name full of promise, which literally means God helps. This character is not anonymous. His features are clearly delineated and he appears as an individual with his own story. While practically invisible to the rich man, we see and know him as someone familiar. He becomes a face, and as such, a gift, a priceless treasure, a human being whom God loves and cares for, despite his concrete condition as an outcast (cf. Homily, 8 January 2016).

Lazarus teaches us that other persons are a gift. A right relationship with people consists in gratefully recognizing their value. Even the poor person at the door of the rich is not a nuisance, but a summons to conversion and to change. The parable first invites us to open the doors of our heart to others because each person is a gift, whether it be our neighbour or an anonymous pauper. Lent is a favourable season for opening the doors to all those in need and recognizing in them the face of Christ. Each of us meets people like this every day. Each life that we encounter is a gift deserving acceptance, respect and love. The word of God helps us to open our eyes to welcome and love life, especially when it is weak and vulnerable. But in order to do this, we have to take seriously what the Gospel tells us about the rich man.

2. Sin blinds usThe parable is unsparing in its description of the contradictions associated with the rich man (cf. v. 19). Unlike poor Lazarus, he does not have a name; he is simply called “a rich man”. His opulence was seen in his extravagant and expensive robes. Purple cloth was even more precious than silver and gold, and was thus reserved to divinities (cf. Jer 10:9) and kings (cf. Jg 8:26), while fine linen gave one an almost sacred character. The man was clearly ostentatious about his wealth, and in the habit of displaying it daily: “He feasted sumptuously every day” (v. 19). In him we can catch a dramatic glimpse of the corruption of sin, which progresses in three successive stages: love of money, vanity and pride (cf. Homily, 20 September 2013).

The Apostle Paul tells us that “the love of money is the root of all evils” (1 Tim 6:10). It is the main cause of corruption and a source of envy, strife and suspicion. Money can come to dominate us, even to the point of becoming a tyrannical idol (cf. Evangelii Gaudium, 55). Instead of being an instrument at our service for doing good and showing solidarity towards others, money can chain us and the entire world to a selfish logic that leaves no room for love and hinders peace.

The parable then shows that the rich man’s greed makes him vain. His personality finds expression in appearances, in showing others what he can do. But his appearance masks an interior emptiness. His life is a prisoner to outward appearances, to the most superficial and fleeting aspects of existence (cf. ibid., 62).

The lowest rung of this moral degradation is pride. The rich man dresses like a king and acts like a god, forgetting that he is merely mortal. For those corrupted by love of riches, nothing exists beyond their own ego. Those around them do not come into their line of sight. The result of attachment to money is a sort of blindness. The rich man does not see the poor man who is starving, hurting, lying at his door.

Looking at this character, we can understand why the Gospel so bluntly condemns the love of money: “No one can be the slave of two masters: he will either hate the first and love the second, or be attached to the first and despise the second. You cannot be the slave both of God and of money” (Mt 6:24).

3. The Word is a giftThe Gospel of the rich man and Lazarus helps us to make a good preparation for the approach of Easter. The liturgy of Ash Wednesday invites us to an experience quite similar to that of the rich man. When the priest imposes the ashes on our heads, he repeats the words: “Remember that you are dust, and to dust you shall return”. As it turned out, the rich man and the poor man both died, and the greater part of the parable takes place in the afterlife. The two characters suddenly discover that “we brought nothing into the world, and we can take nothing out of it” (1 Tim 6:7).

We too see what happens in the afterlife. There the rich man speaks at length with Abraham, whom he calls “father” (Lk 16:24.27), as a sign that he belongs to God’s people. This detail makes his life appear all the more contradictory, for until this moment there had been no mention of his relation to God. In fact, there was no place for God in his life. His only god was himself.

The rich man recognizes Lazarus only amid the torments of the afterlife. He wants the poor man to alleviate his suffering with a drop of water. What he asks of Lazarus is similar to what he could have done but never did. Abraham tells him: “During your life you had your fill of good things, just as Lazarus had his fill of bad. Now he is being comforted here while you are in agony” (v. 25). In the afterlife, a kind of fairness is restored and life’s evils are balanced by good.

The parable goes on to offer a message for all Christians. The rich man asks Abraham to send Lazarus to warn his brothers, who are still alive. But Abraham answers: “They have Moses and the prophets, let them listen to them” (v. 29). Countering the rich man’s objections, he adds: “If they will not listen either to Moses or to the prophets, they will not be convinced even if someone should rise from the dead” (v. 31).

The rich man’s real problem thus comes to the fore. At the root of all his ills was the failure to heed God’s word. As a result, he no longer loved God and grew to despise his neighbour. The word of God is alive and powerful, capable of converting hearts and leading them back to God. When we close our heart to the gift of God’s word, we end up closing our heart to the gift of our brothers and sisters.

Dear friends, Lent is the favourable season for renewing our encounter with Christ, living in his word, in the sacraments and in our neighbour. The Lord, who overcame the deceptions of the Tempter during the forty days in the desert, shows us the path we must take. May the Holy Spirit lead us on a true journey of conversion, so that we can rediscover the gift of God’s word, be purified of the sin that blinds us, and serve Christ present in our brothers and sisters in need. I encourage all the faithful to express this spiritual renewal also by sharing in the Lenten Campaigns promoted by many Church organizations in different parts of the world, and thus to favour the culture of encounter in our one human family. Let us pray for one another so that, by sharing in the victory of Christ, we may open our doors to the weak and poor. Then we will be able to experience and share to the full the joy of Easter.