Pope thanks Italian dioceses for gift of Christmas tree and crib 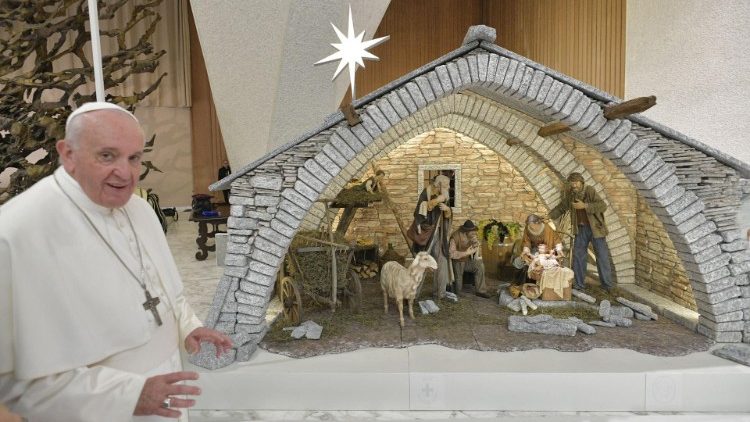 Pope Francis met with a delegation from the Italian dioceses of Trento, Padua and Vittorio Veneto and thanked them for the gift of the Christmas tree and nativity scene to the Vatican this year.  The Pope began by recalling last autumn’s storm that devastated entire wooded areas in Italy’s northern Triveneto region, home to the dioceses that donated this year’s Christmas tree to the Vatican. “These are events that frighten us”, said the Pope, “they are warning signs that creation sends us, and that ask us to take effective decisions immediately for the protection of our common home.”

Turning to the nativity scene, Pope Francis said this Christmas crib, made almost entirely of wood and composed of architectural elements characteristic of the Trentino tradition, will help visitors enjoy the spiritual richness of Christmas. “The wooden trunks from the areas affected by the storms, which serve as a backdrop to the landscape, underline the precariousness in which the Holy Family found itself on that night in Bethlehem”, said the Pope.

Pope Francis concluded by recalling his visit last Sunday to the town of Greccio, the place where St. Francis made the first nativity scene. The Pope referred to his Apostolic Letter, Admirabile signum, dedicated to the Christmas crib, “which is a simple and wonderful sign of our faith and is not lost”, he said. “Indeed, it is good that it is handed down from parents to children, from grandparents to grandchildren. It is a genuine way of communicating the Gospel, in a world that sometimes seems to be afraid to remember what Christmas really is”.