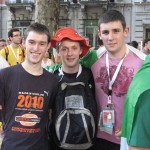 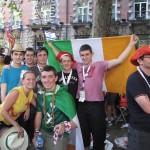 The experience of World Youth Day is one which is ‘unimaginable and indescribable’.  This was the general consensus from our 12 young pilgrims and 4 leaders from the diocese of Waterford and Lismore who made the journey to Madrid for World Youth Day 2011.  World Youth Day is a great worldwide encounter with the Pope which is celebrated every two to three years in a different country.

We began our journey Monday 15th August.   Mixed emotions consumed the young pilgrims.  They were filled with expectations and excitement about what this journey might entail, while at the same time a little anxious and nervous.   We departed Cork Airport having celebrated the first ever Mass in the airport, and arrived at our accommodation in Toledo.

We celebrated the Opening Mass of the Pilgrimage with Cardinal Antonio Maria Rouco Varela, Archbishop of Madrid, in Cibiles Square in the city.  Our young pilgrims were greeted by a mass of young people from all over the world who were openly displaying their faith, allowing our young people the freedom to express their own faith openly.   This desire to participate continued throughout the rest of the week leaving some of our young pilgrims somewhat surprised at discovering the depth of their own faith.

On Wednesday, Thursday and Friday we spent several hours in the Basílica de Nuestra Señora de Atocha where we had faith sharing sessions with young pilgrims from various English-speaking countries, Holy Mass and catechesis sessions with Archbishop Mark Coleridge of Canbarra and Goulburn (Australia), Archbishop Timothy Dolan of New York (USA) and Cardinal Keith Patrick O’Brien, Archbishop of Edinburgh (Scotland).  The thought of spending three hours in a Church was daunting for our group but after all the singing, dancing, faith sharing and words of wisdom from the Archbishops, they were elated.  One member of our group remarked, ‘I can’t wait to tell my friends at home that Mass can actually be fun’.  On these days we also visited El Escorial Monastery, the Cathedral of Madrid and participated in the welcoming ceremony for Pope Benedict XVI and in the Stations of the Cross through the streets of Spain’s capital city.

Saturday took us on our pilgrimage walk to Cuatros Vientos aerodrome for the Vigil with the Holy Father.  It is estimated by some that almost two million pilgrims turned up for the Saturday Vigil and the Papal Mass on Sunday.  We slept under the stars on Saturday night and even the storm at the beginning of the Vigil couldn’t take form the electric atmosphere.  All around us young people from every nationality were waving flags and exchanging memorabilia.  Our Irish flag attracted a lot of attention from people who wanted to befriend us and take pictures with us.  There was a festival feel to the night as one of our young pilgrims compared it to ‘Oxygen’.  When our group finally settled in to get some rest, our young pilgrims obviously moved by all they had experienced in the last week and feeling more awakened in their faith, requested that we say the rosary before we slept.

It is an experience that they could not have anticipated.  As one of the leaders and an RE teacher it was an eye opener to bear witness to the visible difference that World Youth Day has made in the lives of our young pilgrims.  Heartfelt thanks are owed to Bishop Lee, Fr. Paul Murphy and all the sponsors for facilitating this meaningful youth pilgrimage.