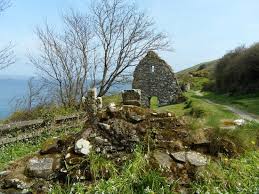 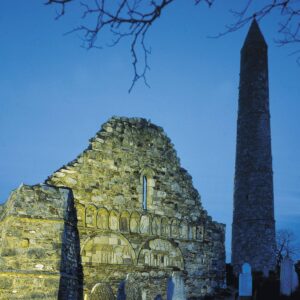 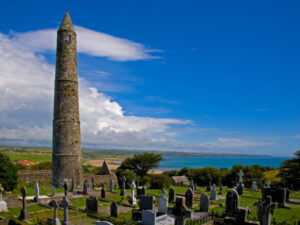 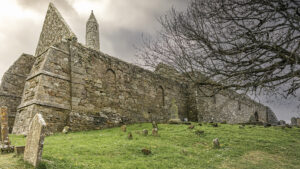 Pictured above are images from Ardmore

St. Declan
St. Declan, a prince of the Decies Kingdom in Munster, was born in the 5th century. He was baptised by a priest named Colman, later to become St. Colman. When Declan was seven years old he studied under a sage called Dioma. This training continued for many years until Declan, taking with him some of his disciples, went to Rome for further instruction in Christianity. While in Rome the Pope consecrated Declan. Declan had a strong desire to return to Ireland and, according to legend, he had in his possession a miraculous black bell with which he summoned an empty vessel to carry him on his journey. The bell was placed in a rock and when Declan prayed the rock floated out to sea. He followed it and eventually, it led him to shore at Ardmore, Co. Waterford. There Declan worked conscientiously among the people and built a Church.

While returning to Ireland it is reported that Declan met St. Patrick. Declan and three other Bishops – Ibar, Cieran and Ailbe were evangelising in Ireland when St. Patrick arrived here. Declan did not confine his work to Ardmore and the Déise region but he also travelled further afield and especially to Cashel.

One of the most remarkable groups of ancient ecclesiastical remains in Ireland can be seen today in Declan’s well-loved Ardmore – a beautiful and perfect Round Tower, a singularly interesting ruined Cathedral, the ruins of a second Church beside a holy well, a primitive oratory and some ogham-inscribed pillar stones.

Declan is an outstanding example of a Saint whose cult has not only survived, but has recently shown a marked revival. This is demonstrated by pilgrims, visitors and local people who are proud of St. Declan and the strong faith that they have inherited.