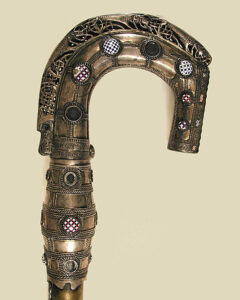 Pictured above is the Lismore Crozier

Cárthach, also known as Mochuda, a native of Kerry, founded a monastery in Lismore in 633 which soon became known for its learning and was visited by many people. Within a few decades it was renowned throughout Britain and Europe, becoming as famous as Bangor and Clonmacnoise.

The main section of Lismore monastery was situated in a dramatic position on a high crag. The students lived in little huts made of mud and wattles, stretching for nine miles along the banks of the Blackwater. As in other famous Celtic monasteries there was a scriptorium, and also a school of metalwork, where artefacts like the famous Lismore Crozier were made. The Crozier and the Book of Lismore were found hidden in the walls of Lismore Castle in the nineteenth century.

Today there is little trace of St. Carthage’s famous monastery. Lismore Castle, part of which dates from the early seventeenth century, was built on the site of the monastery and medieval towers and monastic ruins were incorporated into the general construction. The monastery of Lismore is today remembered in Lismore Heritage Centre, where visitors are treated to an award-winning multimedia presentation, which takes them on a journey through time, beginning with the arrival of St. Carthage in 636 and finishing at the present day. All major works on monasticism published today stress the important role of Lismore in the Irish Church and as a major place of learning.