On Monday 18th July, a small group from Waterford and Lismore Diocese arrived back in Ireland from a trip to Kenya.  Five of us had gone out, two secondary school teachers, the Diocesan Advisor for Secondary Schools, the Director in Ireland for the charity Mary’s Meals and myself, setting off early Monday morning the 11th July for Nairobi, Kenya.  The purpose of our visit was to create a missionary outreach for the Diocese.  In Bishop Michael Russell’s time there was a very vibrant mission to Kitui in Kenya and the parish of St. Joseph and St. Benildus also currently has a mission in Kenya.  The Secondary School teachers travelled because it was a personal dream come true for them and they wanted to bring their personal experience of Africa to their own students, creating links between schools, which would be of mutual benefit to schools in Kenya and here in the Diocese.

After a brief time in Nairobi, we travelled to Eldoret and visited some schools there.  Most of our time was spent in Northern Kenya in Turkana and the Diocese of Lodwar.  This is an arid and desert area where there has been no rain for three years.   Life is lived at a very basic level, many live in poverty.  Putting food on the table is a constant struggle.  The provision of water is a never-ending battle with some who travel several kilometres and back, bringing the precious commodity in plastic oil drums on motor bikes, bicycles, or on foot.

We saw at first hand, the work of the charity called Mary’s Meals, which has a very simple philosophy – feeding children in school – children who would not get a meal at home every day and whose parents did not have the means or energy to feed them or send them to school on a regular basis.  The provision of a meal in school each day ensures that they get fed and receive a basic education at the same time.  The food is sourced locally as much as possible and is cooked and served by local volunteers, mostly mothers.  Mary’s Meals currently feeds almost 2.5 million children daily and is giving hope to many.

In spite of all this poverty, we were met with a welcome the like of which we had never experienced.  The sheer simplicity, humanity and joy of the local people touched us all.  From the little they had they gave us gifts of traditional cloaks, straw hats and baskets and even an occasional goat.

At all the Eucharistic celebrations which we attended, the singing and dancing were uplifting and were something which we had never experienced before.  At our last Mass on July 17th to a full Lodwar Cathedral there was no need for the priest to say “Lift up your hearts”, that was quite superfluous.

It is our hope to build on our Kenyan experience.   The Secondary School teachers desire to create a twinning of schools in Lodwar and here in the Diocese.  Perhaps parishes here in Waterford and Lismore could link with a parish in Lodwar, not to be simple benefactors of a poorer people but very much as a relationship of equals, some with more material goods, others more spiritually rich.

The work of Mary’s Meals too is a charity really worth supporting and all of our group saw the good fruits being produced by this organisation.

We visited Nairobi on our last day. This bustling city was in stark contrast to Turkana.  We saw slums where millions live.   While apartheid was something associated exclusively with South Africa, it also existed in other parts of Africa including Kenya.  There are parts of Nairobi today which still bear the effects of class distinction where some people are treated as second-class citizens because of their skin colour.

But there is much hope too.  On our last day in Kenya our group visited Strathmore University in Nairobi which is one of the top academic institutions in all of Africa, forming students not only academically, but in terms of character, creating a new generation which will inspire native Kenyans to develop all the riches of their wonderful country.

Before we travelled to Kenya, we had been told of the work done by Irish Religious and Priests.  We saw evidence of this everywhere we went.  The Irish men and women who went over to Kenya as part of the SMA Fathers, the Loreto Sisters, the Ursuline Sisters, the Spiritan Fathers, the Sisters of Mercy, the Kiltegans, the Sisters of the Holy Rosary, the Franciscan Sisters, etc. founded schools, hospitals, clinics, care centres and dedicated their lives to building up a country which was not their own and yet became, for them, their life’s mission to see flourish.

During our week in Kenya, we visited about twenty schools and it is our group’s desire that we will play our part in reaching out to those less fortunate and yet who can teach us so many things. 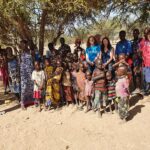 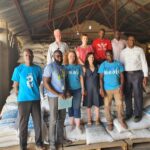 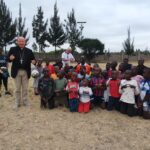 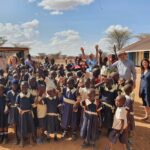 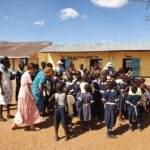 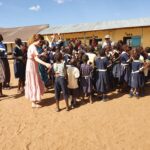